"The body strikes back" - Defence against viruses

Viruses can inject their genetic material in cells and force them to produce copies of the viruses. Consequently, infected cells are no longer able to fulfil their original functions. But immune cells can stop the rapid increase of the viruses. The film shows how.

"The body strikes back" - Defence against viruses

At the 10th International Congress for Medical Science in Berlin in 1890, the doctor and microbiologist Robert Koch pointed out that, apart from bacteria, there must exist “other groups of micro organisms”, which can cause diseases. At this point, medical scientists could only make assumptions about the existence of viruses. The reason is, that viruses are very small – they measure only 0.02 to 0.7µm. Therefore, viruses are not visible under optical microscopes. In the 1930s, the electron microscope was invented. Not until then, scientists were able to picture the virus. 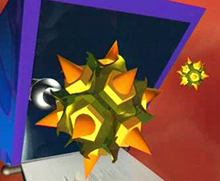 When viruses enter the body, the unspecific immune defence attacks them first.

Viruses consist of a protein shell, which covers the genetic material. Their shape is often round or stick-like. Viruses have no metabolism, they are unable to reproduce or move on their own and they do not grow. For this reason, the question, if viruses can be classified as living beings, is a matter of controversial debates among scientists.

When viruses enter a living cell, they insert their genetic material into the cell’s DNA. The host cell now produces proteins and viral DNA, or RNA. Out of these building blocks, new viruses are formed. Finally the cell explodes and the newly formed viruses are released into the environment. They will now infect new cells, if the body’s own defence mechanisms do not intervene.