"The body strikes back" – Neurodermatitis

In Germany about three million people suffer from the chronic skin disease neurodermatitis. The film explains why an affected person’s skin reacts even to the smallest amounts of allergens with redness and pruritic eczema.

About three million people in Germany suffer from neurodermatitis. Several factors play a role in this chronic skin problem. The sufferers, often children before the onset of puberty, have unusually large quantities of IgE antibodies, which also makes them susceptible to pollen, animal hair and food allergies. Moreover, the sensitivity of the skin of neurodermatitis sufferers has also risen. It reacts to dust, soap, clothing and the person's own perspiration with reddening and violently itching rashes. Scratching makes the inflammation worse. Typically, the symptoms of neurodermatitis appear repeatedly and in phases. 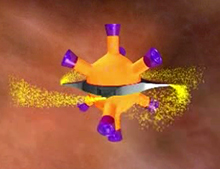 A T-helper-cell releases messenger substances to “inform” the immune system about the allergen.

We only know some of the factors which trigger neurodermatitis. Besides a hereditary disposition and environmental influences, stress also makes a major contribution to the occurrence of the disease. Psychological problems not only increase perspiration – they also affect the immune system. Messenger substances can increase hypersensitivity and favour the inflammatory damage to the skin.

In addition to treatment with substances such as cortisone which inhibit the inflammation, many neurodermatitis sufferers are helped by radiation with long-wave UV A light. Filters retain the heat-producing and carcinogenic parts of the radiation. This so-called cold light suppresses the activities of the Langerhans cells. It reigns in the excessive immune defence, and the problems subside.