"The body strikes back" - Immune therapy for metastases

Scientist hope that immune therapy can be designed to assist the body’s defence mechanisms against metastases. Metastases are cancer cells, which separate themselves from a tumour and spread through the body. The film describes how metastases develop and outlines how immune therapy is supposed to act on them. 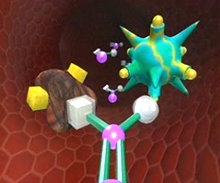 Genetically modified antibodies are designed to assist the immune system in its battle against metastases.

Cancer cells which break away from the initial cellular group are a particular problem. They can spread through the body by travelling along lymph and blood vessels and then settle at another spot far removed from their origins. Fortunately, one out of 10,000 cancer cells at the most manages to find secure anchorage on the walls of the vessels in the turbulence of the bloodstream. Most of them die. But if the anchorage is secure, the renegade cancer cells form colonies. The result is subsidiary tumours, so-called metastases. If they have developed at a number of places in the body, the cancer is often very difficult to treat. Usually, undiscovered metastases lead to organ failure or even the patient's death; the primary tumour itself is less often the cause.