"The body strikes back" - Immune defence against cancer

Cancer is caused by mutations of the genetic material of a cell. If the genetic information is changed to allow uncontrolled growth, a tumour might develop. How this can be prevented by the body’s immune defence is explained in the film.

Spent cells are constantly being replaced by new ones in the human body. The speed in which cells grow and divide depends on the type of tissue. The speed must be high for intestinal cells because they are constantly being excreted with the stool. The growth and division rates of bone marrow cells are also high. Otherwise they would not be able to supply new blood and immune cells fast enough. The long-lived nerve cells, on the other hand, grow very slowly. Every cell type sets its own inner clock so that new formation and dying are balanced. This rhythm has been disrupted in almost all forms of cancer. The cell production runs at full speed and goes far beyond the actual needs. The fatal tumour growth is cranked up.

As long as a tumour is restricted to a certain organ, it can usually be removed surgically and the cancer is completely curable. Surgery is the oldest, most common and most successful treatment method for cancer. But it is useless if the tumour has already spread to surrounding organs and cannot be completely removed surgically. 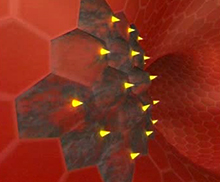 Cancer cells which break away from the initial cellular group are a particular problem. They can spread through the body by travelling along lymph and blood vessels and then settle at another spot far away from their origins. Fortunately, in the turbulence of the bloodstream, only one out of 10,000 cancer cells at the most manages to find secure anchorage on the walls of the vessels. Most of them die. But if the anchorage is secure, the renegade cancer cells form colonies. As a result, subsidiary tumours, so-called metastases, emerge. If they have developed at a number of places in the body, the cancer is often very difficult to treat. Usually, undiscovered metastases lead to organ failure or even to a patient's death; the primary tumour itself is less often the cause.