"The body strikes back" - Gene therapy for cancer patients

"The body strikes back" - Gene therapy for cancer patients

The three most important forms of therapy used for cancer today are surgery, chemotherapy and radiation therapy. A combination of several therapies is often used.

As long as a tumour is restricted to a certain organ, it can usually be removed surgically and the cancer is completely curable. Surgery is the oldest, most common and most successful treatment method for cancer. But it is useless if the tumour has already spread to surrounding organs and cannot be completely removed surgically. 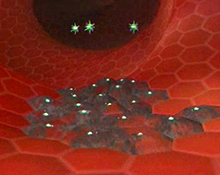 Cancer cells carry antigens, which can be recognised by cells of the immune defence.

Chemotherapy is intended above all to fight metastases at an early stage before they can be located. Chemotherapy is the administration of cell toxins ("cytostatics"), either by injection into the bloodstream or orally in the form of pills. The medications inhibit the growth of the cancer cells or kill them. But chemotherapeutic agents, just as radiation, also affect healthy cells - especially those which, like cancer cells, divide rapidly. Side effects such as nausea, fatigue, vomiting and loss of hair generally accompany a regimen of chemotherapy. The white blood cells are especially hard hit so that patients are particularly susceptible to infections during the chemotherapy. For this reason, the patient's bone marrow is removed for the time of the treatment with high-dosage chemotherapy so that the blood-forming cells are protected from damage caused by the strong medicines.

If the tumour cannot be removed completely, the affected body region is subjected to (usually) high-energy radiation (electromagnetic or ionizing radiation). The cancer cells are damaged so badly that they finally die. But damage to healthy cells during the administration of the radiation is unavoidable. However, they can repair damage from radiation better than cancer cells, whose repair mechanisms are defective. On the average, 25-35 radiation treatments are required to destroy the cancer cells. Radiation dosage and duration are dependent on the tumour type.