"The body strikes back" - The HI-Virus

AIDS (Acquired Immunodeficiency Syndrome) is caused by an infection with the HI-virus. This virus weakens the immune system of an affected person significantly, because it invades important cells of the immune system. The film reveals the strategies the virus uses to enter these cells.

No one knows how long the HI-virus has existed before. Only as recently as 1981, medical scientists in San Francisco came across strange findings: A number of men from the homosexual subculture had come down with an extremely rare form of pneumonia as well as with a type of skin cancer that had almost never been seen before. All of the patients had extremely high fever, and most of them died after a brief time.

Over the course of the following years, AIDS became one of the most feared scourges of the human race. According to the WHO, in 2007 2,1 million people died as a result of the disease. About 33.2 million are infected or have already developed the illness. Poorer countries, especially South Africa, Namibia and Tanzania have been hit hardest. But even the more prosperous nations report a disturbing number of new infections every year. 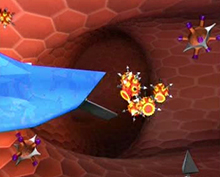 In the beginning, AIDS was therefore regarded as a punishment for homosexuality by some people - for some time people even spoke of the "gay epidemic." Myths about infection via ordinary social contacts resulted in panic. Till today HIV infections are associated with social misconduct and patients are discriminated against.

Apart from health impairment, a HIV infection causes economic, social and psychological problems. HIV infected persons or their relatives are often confronted with social exclusion. In Africa children are affected far the worst: 12 million children and teenagers have lost either mother, father or both parents because of HIV. In some villages only children and grandparents are left, as the generation of parents has died due to HIV. Consequences for children are often poverty, excessive demands and loss of support and affection.