"The body strikes back" - Allergic reaction

An allergic person’s immune system is extremely sensitive for certain environmental substances (allergens). The film shows how the immune system reacts on such allergens.

An Allergy is Not Just an Allergy

There are four basic types of allergies which differ from one another with respect to their immune reactions. The Type I allergies include hay fever, allergic asthma, neurodermatitis and anaphylactic shock. Type II allergies include intolerances of medicines such as penicillin. Type III allergies can be caused by medicines or other allergens. The best-known example is the so-called farmer's lung. Mould spores in hay trigger the allergy and result in a chronic inflammation of the lung tissue. Type IV allergies are frequently triggered by chrome, nickel and latex components which manage to enter the body when there is long-term contact with the skin. One to three days later, the skin reddens and itches, blisters, knots and eczema form. 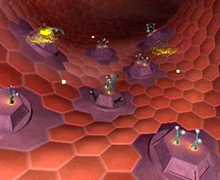 There is an immediate reaction for Types I-III. Only a few seconds, at the most a few hours, pass before the allergy sufferer notices the symptoms. Type IV is a delayed reaction because the symptoms do not appear until one or two days later. The defence mechanisms leading to overreactions in allergy sufferers are part of the normal repertoire of the immune system. This diverse repertoire enables the system to respond to the various strategies used by pathogens in their attempts to settle into the body.