In HIV infected patients, the virus enters body cells. Instead of doing the job the cells are supposed to do, they now replicate HI-viruses. This cycle is illustrated in a simplified animation. Thus the virus infects important cells of the immune defence. In consequence the immune system is ineffective. 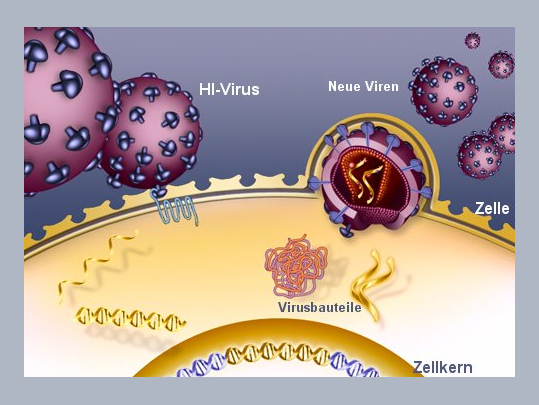 Masses of new viruses are created from the "virus components" produced by the cell. They leave the cell and can infect other defence cells of the human. Every day, up to 100 billion new viruses are created in the body of a person infected with HIV. They destroy important defence cells in the body and rob it of its most important form of protection.

HI Viruses - Harbinger of Death from the Jungle

AIDS is a serious weakening of the body's own immune system. It is caused by the human immunodeficiency virus, abbreviated HIV. AIDS makes the organism susceptible to all sorts of infectious and cancerous diseases which a healthy human being normally deals with without any trouble. Over the course of time, these illnesses result in death.

HI viruses are transmitted when they are carried over into the blood system of another person through the mucous membranes or small injuries along with blood, sperm or vaginal secretions. Most HIV infections can be traced back to unprotected sexual intercourse. 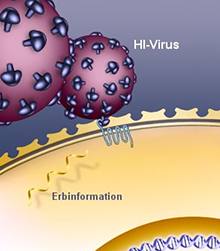 The virus injects the building plans stored in its genetic material into the infected cell.

Following the HIV infection, there are a number of stages to the illness.

HIV positives, people who have been shown to have antibodies against the HI virus in their bodies, only have temporary signs of illness initially. They suffer from symptoms similar to the flu, usually weeks after the infection, but these symptoms disappear again after a time without further treatment.

There follows a period without any symptoms which can last for a number of years. In the preliminary stage of AIDS, the first secondary infections appear, accompanied by fever and diarrhoea. The last stage is also known as full-blown AIDS. The patients become emaciated. They suffer from serious infections caused by viruses, bacteria and fungi. Severe lung and cancer diseases are typical for this stage.

Evidence is mounting that the HI viruses are descendants of virus strains which could originally survive only in animals. They were transmitted from chimpanzees and white-collared Mangabeys to human beings. Experts view the real cause to be the illegal hunting of monkeys and apes for their meat. When the animals are butchered, blood is spilled and the risk of injury is great. But even a tiny wound means that someone can become infected from the blood of an infected animal.