The lifecycle of the HI-virus is disrupted by special drugs for AIDS at different stages. Drugs are usually given in combination in order to prevent the occurrence of resistant viruses. The animation depicts the different methods, which are designed to delay the outbreak of AIDS. 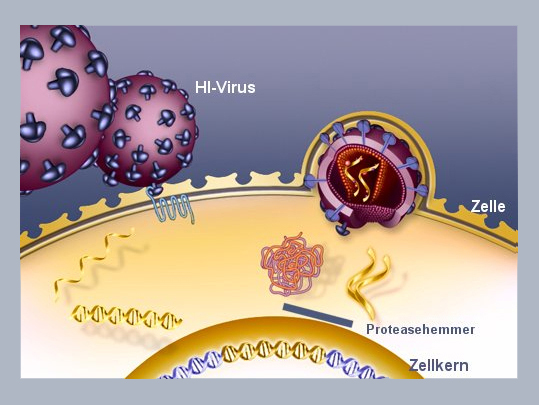 Protease inhibitors prevent the virus proteins produced by the host cell from being cut into "building blocks" of the right length. So the "final assembly" of functioning viruses never occurs.

HI viruses become dangerous only if they enter the blood stream along with body fluids. Protection is possible. In case of doubt, an infection can be determined by a test.

The key phrase "safer sex” covers all sexual practices which virtually exclude the risk of an HIV infection. A steady relationship is more helpful in this respect than brief contact with frequently changing sex partners. The greatest security from infection is provided by condoms. They protect women from viruses in the sperm fluid and men from viruses in the vaginal secretions. 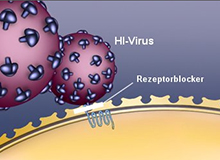 Protease inhibitors prevent the virus proteins produced by the host cell from being cut into "building blocks" of the right length. So the "final assembly" of functioning viruses never occurs.

A person must be educated if he or she is to realistically judge the risks of an HIV infection. Drug addicts should be sure that they use only disposable syringes rather than sharing needles. HIV positive mothers must keep in mind that they can infect their unborn child.

Better education, especially in the poor countries whose populations have a comparatively low level of school education, could contribute to a reduction in the rate of infection. Many of the people there are not aware of the risks, simply do not know how the HI virus is transmitted. Very few are able to afford condoms anyway. Social desperation leads to prostitution. The situation is completely out of control in southern Africa. Migratory workers, refugees and people looking for work spread the virus. The consequence: 50% of all new infections in the world affect people in Africa south of the Sahara.

The classic test proves the existence of antibodies in the blood which an infected person has formed to fight the HI virus. Every Health Office offers this test free of charge and anonymously, following a consultation. If no antibodies have formed three to four months after a presumed HIV contact, there has been no infection.

Besides the indirect procedure, there is also a direct procedure. In this case, the genetic substance of the HI virus is reproduced and detected. This complicated method is called PCR (polymerase chain reaction). It can detect the slightest trace of virus, even shortly after the infection. The method is normally too complicated for routine application and is not as sure as the antibody test.